The Spanish league has become a general bore: week after week one has to watch Barcelona play like the Harlem Globetrotters and destroy other teams, and Real Madrid trying to keep up. Although these two teams have always dominated in Spain, the difference has never been so marked as now: there are the two teams and all the rest.
So it is very refreshing indeed when one of the teams lose, like happened today to Real Madrid in Pamplona against the small team of Osasuna, who is looking to fight relegation, but is usually very strong at home. It was an intense match, mostly towards the end when Real Madrid's superstars, including their new Togolese striker Emmanuel Adebayor, tried to put pressure on the fighting Osasuna side. However, Real Madrid were poor today, and José Mourinho seemed only to react late with changes. Pressure is growing on the Portuguese super-coach, who could be out if Real Madrid does not take a title for another season (note the average time of Real Madrid coaches since 2002, 9 months!).
It was only Real Madrid's second defeat this season, but there are now seven points up to Barcelona, who at the time looks undefeatable.
Congratulations and thank you to Osasuna! I hope they defeat Barcelona as well!
Posted by El Erik at 21:05 No comments:

Japan won the Asian Cup final against Australia on a 1-0 victory in extra time. Tadanari Lee scored the winner to give the Japanese team its fourth continental title.

Congratulations to Japan and all their fans!
Posted by El Erik at 23:00 No comments:

In my view and experience, football breaks down barriers of nations, race, class, age, and well..., gender!
However, in spite of advances over the years, football culture remains very male-chauvinistic, perhaps blocking the complete breakthrough of women's football (I think the main problem with women's football is that it is not as technically good as men's, but it surely could be! Look at Marta!). But also, the attitude of many men block women from actually participating and engaging in football. I must say that some women I know are football-fanatics and experts as much as the next guy (of course not as much as me; but few people are!), and this makes football culture richer.
It is therefore only refreshing when the English Premier league introduces women referees, who surely are as capable, good, our lousy as the next male referee! It is therefore also very deserved when two renown football commentators, Andy Gray and Richard Keys are fired for making demeaning and chauvinist comments on TV about a female referee! What they said is, besides being idiotic nonsense, completely unacceptable, in particular for commentators, who may be football fans, but have a greater responsibility that a normal football fan because they are speaking to the world, and have the great power that comes with that.
In any case, I hope this only contributes to less discrimination, also based on gender!
Posted by El Erik at 03:00 2 comments:

I must admit that due to time difference and media coverage in this part of the world, I have not seen any matches of the 2011 Asian Cup in the future World Cup hosts of Qatar. However, I will have to try to watch the final this next Saturday against two giants that I have found excellent to watch in the last two World Cups: Australia was great in 2006, barely losing to Italy, and fought well in a difficult group in 2010. Although they only recently became part of the Asian football Federation, I think this has only made Asian (and Australian) football stronger.
Japan has been in every World Cup since 1998, and been steadily improving, this last World Cup beating Denmark and playing an intense match with Paraguay in the last-16, only being eliminated on penalty kicks.
In fact, the two teams faced one another in the 2006 World Cup, with a resulting 3-1 victory for Australia.
Japan is in the final after an intense match with another of Asia's giants and their close rival, South Corea. The match ended 2-2, with a last minute equalizer from the Coreans, but the Japanese were coolest from the penalty spot, where South Corea missed every single kick! Australia on the other hand trashed one of the surprises of the tournament, Uzbekistan, 6-0.
The final between these nations should be a great match, and I hope to be able to watch it!
Posted by El Erik at 02:29 1 comment:

An overlooked tournament is taking place right now: the South American U-20 championship in Perú. The tournament is important because there are perhaps no other areas in the world where the u-20 teams are nourished as a seed for the future as in South America. And living in Venezuela, I have of course noticed a splendid goal in last night's tie between Venezuela and Perú: 19-year old Yohandry Orozco scored a goal worthy of the best in the world. He plays for Zulia FC in the Venezuelan first division, where he made his debut already at the age of 16, but besides that, I don't know anything about him.The youngster also scored against Argentina, and is becoming a player to notice, although of course, one must be careful to make any predictons of a player so young. He may have a golden future, or be a one-off...
Anyway, the splendid goal can be seen here:

I have a TV now and satelite connection, so my life will now take a great leap in terms of being able to watch football!
Although many people like Barcelona, I think it is great when teams like these are humbled by a smaller team. And it was great today to watch Betis, from the Spanish second Division, defeat the best team in the world 3-1 in the quarterfinal of Copa del Rey. Granted, Barcelona won the first match 5-1, and are in the semifinal, and today played with many reserves, but that does not take away that Betis played a great match against a team that even with substitutes should have been better. It was in fact disappointing to see some of the Barcelona reserves not play well, and hold far less possession than one is used to from FC Barcelona. Betis was great nevertheless, and everyone should greatly look forward to seeing them in the Spanish first division!
Posted by El Erik at 00:11 No comments:

I must admit that although I greatly admire Lionel Messi, and probably agree that he is the most noteworthy player in the world, I am not wholly in agreement about winning the FIFA Balon d'Or today.
I am not sure what the criteria for the title are, but if they indeed are the player that seems to do the most amazing things on camera - the one that most looks like a Playstation player, it is indeed the little Argentinean Magician. But if, for a year, a player has been central - crucial - to teams that have played marvelously, been a core and steady player on winning teams, I am surely of the opinion that Xavi should have won.
But hey, I am not sure I know the criteria!
Anyway, congratulations to Messi! You are indeed a football God! 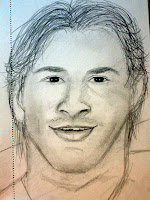 Top-10 Player of the Year

Following my need to make top-10's for the year 2010, here is the list of my favourite 10 players of the year:

10) Carles Puyol: a brilliant defender who gives both Barcelona and Spain tranquility and solidity. His role in both of the world's greatest teams should not be underestimated!
9) Iker Casillas: In my view, the best goalkeeper in the world. He is the crucial captain of Real Madrid, and was very important in giving Spain the world cup title.
8) Diego Forlán: Had a splendid World Cup with Uruguay, and is a hugely dangerous striker, something he also showed with Atlético Madrid, although his form went down in the second half of the year.
7) Arjen Robben: A splendid season with Bayern Munich in the first half of the year. Although injured during the first round of the World Cup, he was splendid when participating in the latter matches, scoring against Slovakia and Uruguay.
6) Mesut Özil: wonderful young player who caught the world's attention on the excellent Germany side in South Africa. His new career in Real Madrid has started well.
5) Lionel Messi: There is no player to watch like him - what he does with the ball is magic, and he seems to have grown in the second half of the year to become more of a leader. However, he had a poor World Cup with Argentina.
4) Thomas Müller: Was a crucial part of Bayern Munich's "double" winning side in the first half of the year, and he scored five goals in the World Cup, besides becoming the best young player of the tournament. His absence in the semifinal against Spain in South Africa was crucial in Germany's defeat.
3) Andrés Iniesta: in spite of many minor injuries during the year (including in South Africa) he is one of the most complete players in the world, and is crucial in both FC Barcelona and in Spain. And well, he scored the winning goal in the World Cup final!
2) Wesley Sneijder: A brilliant player with a leading role in Inter Milan winning "the Triple", and won the title as best player of the CL 2009-10 season. At the World Cup he was consistently player of the match, and scored the crucial winners against Brazil in the quarterfinal.
1) Xavi: The competition at the top-3 is very very difficult, but I have decided to go with FC Barcelona's Xavi. His skills are superb, but it is his vision and passing abilities that have made him the architect behind many of Spain's and Barcelona's victories!
Posted by El Erik at 01:59 2 comments: