I managed to watch the Valencia-Barcelona match in Miami Airport while waiting for a delayed flight.
Valencia had started the league well with three straight wins, while Barcelona had lost points to Real Sociedad. But this remained Valencia's first big test, and it did not go as bad as some would expect, as Valencia was the better team in the first half, and were ahead 2-2. They continued playing well in the second half, but with Barcelona pressuring more until getting the equalizer by way of Cesc Fabregas.
It is good to see that Valencia remained on first spot as Real Madrid did not manage to win either, and this has given many hope about the apparent quality of the Spanish league. But I believe this is a fluke: the Spanish league is still a two-team league. Perhaps Real Madrid and Barcelona are having start-up difficulties; perhaps the small teams are starting with naive optimism; perhaps someone has in some mysterious way decided that the league should start with a little surprise... However, be sure that in a couple of months, the usual balance will return, where the only matches that matter for the title are Real Madrid and Barcelona, while the rest of the teams are only there to fight for the Champions League scraps and relegation.
All Valencia fans live with the illusion of a great Valencia side with title aspirations, but we should all wake up! And until then, just enjoy it while it lasts!
Posted by El Erik at 11:28 3 comments:

I was recently in Florida and went to see my first American football match, from the North American Soccer League, one of the final league matches before the play-off, between the local side, Ft. Lauderdale Strikers and the Atlanta Silverbacks. It was a horrible match until the last few minutes when Atlanta underservedly went ahead, but the Strikers managed a late equalizer. The Silverbacks are the last ones of the league, while the tie was enough for the Strikers to make it to the Play-offs. But more interesting than the match itself was the atmosphere, and to learn about this US professional league, which is "secondary" to the Major Soccer League (MLS) in what for other fans seems to be a strange setup: there is no relegation in US soccer. Instead, it is about whom pays to be in the top league. In fact, the NASL side, Montreal Impact, will from the next season play in the MLS, not because they have ascended (they are leading before the play-offs though), but because of them having a strong financial backing.
I find this strange, and would wonder if it is a hindrance to the development of "soccer" in the USA, considering the enormous potential in the country.
Sadly, Florida has no team in the MLS, although I was surprised to learn of a distinguished history of the Ft. Lauderdale Strikers: they were an important team in the 1970s, and among its players have been the legendary English goalkeeper Gordon Banks, legends Teofilo Cubillas and Gerd Muller, and most interesting of all, the great George Best passed through the club in his late gipsy life of a career. It is thus not a club that is unused to seeing some good football, although that was obviously not the case last Saturday! In any case, I am now an unofficial Striker supporter. 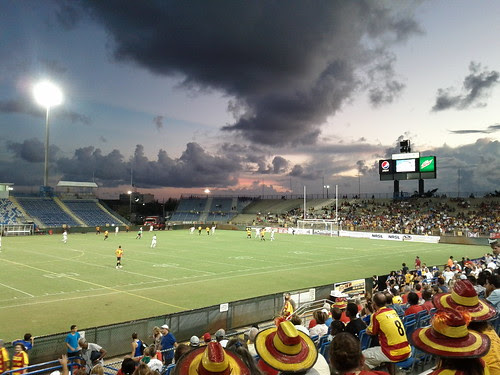 Barcelona didn't win, so now Valencia, after winning 1-0 in a difficult home match against Atlético Madrid, are second in the Spanish League, after Real Madrid. I know it does not matter much after two matches, but right now I can live with the illusion that it does: Valencia is on top!
One the 21st of September Valencia faces FC Barcelona. They will likely have the referee with them, as it does seem that besides Barcelona's and Real Madrid's awesome power in the Spanish league, the referees do have a tacit agreement about helping these teams to be even more superior.
But so far so good for Valencia.
Less so for the best club but worse team in Denmark, Brøndby, who has started in the bottom half of the Spanish league. However, today they managed to get a great victory against Køge, 5-0, and I really hope that this is what will change Brøndby's fortune. Anyway, hope is all that is left for the teams I support...
Posted by El Erik at 01:10 1 comment:

Last week Denmark won a crucial home victory, 2-0 (two goals by Nicklas Bendtner! I didn't know the guy could score any more!), against Norway on the way to the EURO 2012. Denmark now has all the cards to qualify, while Norway has to be very lucky if they are to be in Poland/Ukraine next summer.
As is often the case in these matches, the build-up was further motivated by the neighbourly rivalry between the two nations, for whom the match was crucial.
Thus, it is all the more strange to see now that many players of the Norwegian team were out partying in the nightlife of Copenhagen the day before the match, some of them not getting home until the early hours of the morning.
Notwithstanding that Denmark is a much better football team than Norway, one has to understand the poor Norwegians: Oslo is a pretty boring city where a beer costs some 10 Euros! Can anyone blame these poor guys for not being able to withstand the tempting charm of wonderful Copenhagen???
Hey, next time the Norwegian football team is in Copenhagen, beer is on me!!!! Skaal!!!!
Posted by El Erik at 15:40 No comments: