Cristiano Ronaldo is certainly a deserved winner of the 2013 FIFA Ballon d'Or award as the best player of 2013. He continued to be a wonderful player and has throughout the year stunned fans with fantastic goals and consistent quality performances for both Real Madrid and Portugal, whom he almost singlehandedly qualified for the World Cup. The award has been coming Ronaldo's way for many years, but he has been in the shadow of another great, Lionel Messi, who took the award the last four years. This year he "only" came second.
Although I congratulate Mr. Ronaldo, one really has to question an award that does appear more like a football popularity contest. 184 national team coaches and 184 team captains have a vote, as well as 173 media representatives, and one can see how each one voted on FIFA's website. Studying the results one realizes that in reality this award is given with a high degree of subjectivity (and surely us football fans are able to justify any subjective football opinion in the guise of subjectivity) that more resembles the voting of the Eurovision song contest, in particular amid the national team representatives! Just a few curious observations:
Perhaps all this just shows that it is all a bit arbitrary; I think it was no different when Messi won the previous years. That said, I also believe there is a memory lapse involved; if Messi had not been injured the last couple of months of the year, he may have had a better chance of winning.
Finally, there is certainly also a tendency to favour offensive and spectacular players. It is all but impossible to win this prize for defensive players, no matter how solid they are!

In any case, Ronaldo was the most popular player of the year, and he should be congratulated because he deserves it. He is a fantastic player indeed, but it is not because of this award!
Posted by El Erik at 20:51 1 comment:

One of the greatest players of all time, Eusebio, has passed away. Although a Portuguese national, Eusebio was the first African player to make it to the world stage, being Mozambican when his country was a Portuguese colony.
He played in Benfica from 1960 to 1975 in what was perhaps the best Benfica side of all time. In that period the club from the Portuguese capital won 11 national titles, two European Champions titles and were runners-up in three additional European titles. Eusebio scored an impressive 317 goals in 301 matches for Benfica, where a statue of him is in front of Benfica's home stadium (seen below).
Eusebio also became the star of the 1966 World Cup, overshadowing even Pele. With nine goals he became the most scoring player of the tournament (and very memorable are his four goals against North Corea in the quarterfinals when his side was down 0-3) where Portugal became bronze-winners, the country's best World Cup result ever.
RIP. 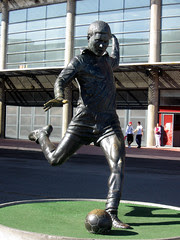 My (very personal) top ten list of the best players of 2013 is as follows:

10. Mario Gotze: While in Borussia Dortmund the German youngster was one of the leading players in taking the Germans to the Champions League final. He was purchased for a record sum by Bayern Munich, where he remains struggling to become a steady player, but still has time.
9. Yaya Toure: Manchester City has many great players, but the best is Yaya Toure, who is solid, technically skilled and an incredible shot. He is also a core player of the Ivorian national team that qualified for the world cup, but could have done better in the Africa Cup of Nations.
8. David Alaba: The young Austrian has established himself as a star in the best team of the world and was named Austrian player of the year for the third year in a row at the tender age of 21. He is set to become one of the world's greatest and is surely the world's best left back.
7. Lionel Messi: Yes, he continued scoring goals like a Duracell battery until his injury, but at the end of the year he was immersed in a soap opera of "sadness", tax-evasion and gossip. He was ok for the Argentinean national team, but was not the one leading them to the World Cup, and it may seem that the most glorious days are over for the Argentinean.
6. Philipp Lahm: Lahm is the captain of the best team in the world, Bayern Munich, and captains the German national team, for whom he played his 100th game in 2013. As captain of the Germans he has been an inspiration, playing as one of the world's best.
5. Zlatan Ibrahimovic: If anything, Ibrahimovic is one of the most charismatic players in modern football, but is surely also a great striker. He is the top scoring player in the French league in a Paris St. Germain side that will do great things, and is surely the best player of Sweden.
4. Neymar: For a long time I doubted whether Neymar was that good, but he has certainly won me over as a fan through hard work, humility, and skills that are out of this world. In Barcelona he has fought hard to prove himself but is now a certain starter, and in Brazil's side he was one of the leading players, a role that will also be expected of him in the World Cup.
3. Luis Suarez: As always, the Uruguayan was mired in controversy and drama, but in the fall he has managed to control himself and has become the best striker in the world for Liverpool FC, scoring many and beautiful goals. With Uruguay he has also been an important player in qualifying them to the World Cup, and if anything, the absence of Liverpool from European football in the spring, may end up with Suarez being fully fresh in Brazil...
2. Cristiano Ronaldo: Also immersed in controversy in the spring under Jose Mourinho in Real Madrid, the Portuguese has nevertheless grown to be the one player who carries a big part of Real Madrid on his shoulders. He is a complete players with extraordinary skill, and was also almost single-handedly responsible for qualifying his country to the World Cup.

1. Frank Ribery: With so many amazing players on Bayern Munich's amazing very complete side, it is almost impossible to see any one player independently of another. That said, Frank Ribery has come to show everything extraordinary about the German side, with skills, power, speed and intelligence, as well as taking responsibility when things are difficult. The last thing he also showed with France's qualification for the world cup, where he will indeed be crucial if France is to have any hopes of advancing.
Posted by El Erik at 22:41 No comments:

I am a bit late due to my Christmas vacation, but here comes my (very personal) top-ten list of my favourite teams of the year:

10. Atletico Mineiro: The Brazilian side won its first ever Copa Libertadores, but with their defeat to Raja Casablanca in the FIFA Club World Cup, they "only" get a 10th place in the list
9. Tahiti: Perhaps the proof that you do not need to be a winner to win fans. Tahiti fought bravely in the Confederations Cup, and the reason they are on this list is perhaps because all us average guys have always wondered how it would be to play against the rest in the world, and Tahiti did it!
8. Uruguay: After major problems in their World Cup qualification Uruguay came back with strength at the end of their World Cup campaign with important victories against Colombia, Peru and Argentina, making it to 5th place and destroying Jordan in a play-off match. Uruguay are eager to do as well as they did last time in a World Cup in Brazil...
7. Atletico Madrid: In a league that continues to be a two-team affair between Barcelona and Real Madrid it is truly refreshing that Atletico Madrid has managed to "annoy" the two giants (in the words of their coach Diego Simeone) playing good football, and also doing well in the Champions League.
6. Borussia Dormund: They were in the shadow of Bayern Munich, but made it to the Champions League final defeating many of the greats, and continue alive in the Champions League.
5. Chelsea: In an up-and-down season the London side managed to win the Europa League, and with Jose Mourinho as new coach they are still candidates for the title in a very exciting Premier League.
4. Nigeria U-17: The U-17 World Cup in the UAE was won by Nigeria, defeating Mexico's defending champions in the final 3-0. It was the fourth time they won it, and redeems their defeat to Switzerland in the 2009 final on home soil.
3. Brazil: Brazil was always going to be a candidate to win the world cup at home. However, under Mano Menezes their play had not been convincing, but this has changed under Luis Felipe Scolari, who led the side to a convincing victory in the Confederations Cup. A winner of the Confederations Cup has never won a World Cup, but Brazil may be the one to defeat this record....

2. Nigeria: A great year for Nigeria, who won the U-17 World Cup, but also took a surprising victory in the Africa Cup of Nations, and qualified convincingly to the World Cup. If anything, Nigeria has in 2013 re-taken its rightful position as one of the world's great footballing powers.
1. Bayern Munich: First under Jupp Heynckes and now under Pep Guardiola Bayern Munich has just been getting better and better, and crowned an awesome year, where they won every tournament they played in, with the title of World Champions. At the end of the year they are first in the Bundesliga and continue in the Champions League. There is no doubt that the team to be in 2014 will be Bayern Munich.
Posted by El Erik at 19:27 No comments: