After greatly enjoying my last NASL match in Fort Lauderdale, I was happy to follow the Strikers' surprisingly making it to the final of the NASL championship after defeating the huge favourites of Puerto Rico Islanders in the semifinal. The other finalists were also an upset, namely the Minnesota Stars, who defeated the North Carolina Railhawks, who had been the best team in the season.
But as everybody knows, stats do not win football (soccer) matches.
The NASL final is played over two legs, and playing the last leg at home, the Strikers seemed to have a slight advantage, but the 3-1 defeat in the first leg in Minnesota, did not make things easier, and so didnt't enormous rainstorms before the match, that made us worry about attendance, or even a cancellation of the match.
But everybody knows that the football gods have great relations with the weather gods, and it hardly rained during the match.
The match was a disappointment for Strikers' fans. They undoubtedly played their chance, and had near to all the play, but Minnesota had come to play Italian Catenaccio and defend their 3-1 lead. This they did very well indeed, with a very strong central defense, and in the end, the Strikers' seemed more desperate in the face of a match that ended 0-0, but which Minnesota could have won.
It was a disappointment for all Strikers' fans, including myself. I usually have good karma on football teams I visit, and perhaps the Strikers making it to the final was the karma I gave them. I had promised that I would buy a Strikers' shirt if the won the championship, so I am still without one! 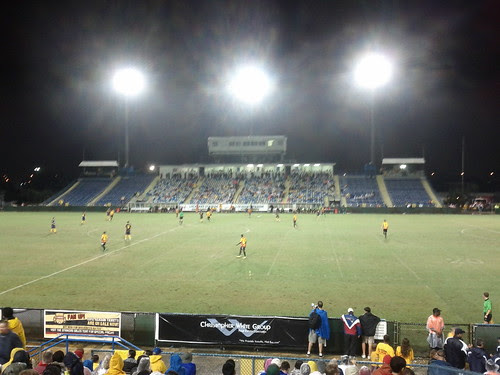 I think nobody was expecting Manchester City to win 6-1 against their local rivals, Manchester United in today's derby in Manchester. It was a strange match, which at the score 3-1 for City, the Reds basically gave up and let Manchester City's awesome striking force with Kun Aguero, David Silva and Edin Dzeko, have a field day.
Manchester City are now on top of the Premier League and increasingly seem like a very serious candidate for the title, while Manchester United, still on second spot, will have to try to rise up from the ashes of one of their most humiliating defeats ever.
Posted by El Erik at 22:28 No comments:

I am not going to join the choir criticizing South Africa's Football Association (SAFA) or coach for their inability to qualify to the African Nations Cup. No, instead I am going to commend the coach, Pitso Mosimane, for his apparent strategic abilities: knowing (or thinking....) that 0-0 against Sierra Leone was enough to qualify, he decided to play on the result rather than a victory against a team most people would think would be easy for the Bafana Bafana to defeat.
Modern football. Why win (at home) when you can tie...?
Turns out 0-0 was not enough, since in case of point-equality, the rules were unfortunately misinterpreted: in case of point-equality, the first criteria to decide who is first, is the mutual encounter between the two concerned teams, and not the score. With this calculation, South Africa was out, and Niger was sensationally qualified.
So what did Pitso Mosimane do? Complain that the rules had not been clear. And in such situations, where a coach has not qualified and is proving somewhat controversial, other football associations might distance themselves from their man.
But not SAFA! No, these guys supported their coach, and were apparently not aware of the regulations either, and lodged a complaint to SAFA about the rules.
Stand by your man! Even when it means making a fool of your footballing system! That is what team sport means!
South Africa will not be going to the African Cup of Nations. But Niger will be great to see there.

You gotta be grateful that the same people running South African football are not running the rest of the country...
Posted by El Erik at 01:50 No comments:

I predict that Argentina is not going to Brazil

I have no doubt that if Venezuela had played the same 11 against Ecuador as they did against Argentina, they would have maximum points in the South American World Cup qualification. Now, instead, they have lost 3 points...
Argentina started well, patiently in what in the first half seemed a more tactical game, where the Venezuelans were figuring out how to play the Argentinean side. And in the second half Venezuela put more pressure and were surely the best team as they seemed to surprise Sabella, who had no remedy against Messi disappearing from the match.
(Uh, and did Higuain play at all...?)

There is a long qualification campaign ahead for all teams, and with these results, nothing is clear at all. Uruguay seems the strongest side, while I am beginning to believe that Argentina will not qualify for the 2014 World Cup.
Argentina has good players but simply lacks tactical skills, leadership, and desire to play in the national team.
Posted by El Erik at 14:44 No comments:

A good day of qualifiers

For the Euro 2012 qualifiers Denmark had to defeat Cyprus, and the match was virtually over after 25 minutes, with Denmark winning 4-0. It ended 4-1, but Denmark did what they had to do, and will now be looking towards a group final against Portugal in Copenhagen next Tuesday. Denmark needs to win to win the group though, after Portugal managed a too difficult 5-3 win over Iceland in Lisbon.
In Caracas, I was unable to watch the match, and I am nervous that I will be unable to watch next Tuesday's match. What I will watch though, are the South American World Cup qualifiers, which I also watched yesterday.
Firstly, Uruguay started against Bolivia with an awesome strike force of Luis Suarez, Diego Forlan and Edison Cavani, and won 4-2. The next match I watched was Ecuador-Venezuela. Venezuelan coach Farias selection of players for this match was odd to say the least, as if they did not expect to win anyway, and this showed on the pitch, where Ecuador was superior in every respect, and won 2-0. Venezuela faces Argentina next Tuesday. Venezuela has never defeated Argentina, and with their performance against Ecuador and Argentina's outstanding 4-1 victory against Chile, it looks more likely that Argentina will prepare a "Churrasco a lo Vinotinto".
Argentina's new coach Alejandro Sabella started very well indeed: the Argentineans played around with Chile, and Lionel Messi, who scored one goal, connected well with Gonzalo Higuain, who scored three goals. Argentina's potential continues to be enormous, and one can only hope that Sabella has found the magic formula to make the team perform at the level it should!
But next Tuesday will be one of the greatest football days of the year!
Posted by El Erik at 14:16 5 comments:

The most difficult qualifying group

The South American qualifiers for the 2014 World Cup in Brazil are starting today. Nine teams (Brazil, as hosts, are automatically qualified) are fighting for four and a half spots, and in this continent, there are no San Marinos or Liechtensteins; all sides are highly comptetitive, and surely have a shot at the tournament. The usual favourites are Uruguay and Argentina, where the latter have a lot to prove after their latest debacles. Paraguay, Chile and Colombia all have very strong sides that can defeat any team in the world, while the "usual" small teams, Peru, Ecuador, Bolivia and Venezuela all have sides that have grown over the last 15 years.
Uruguay will be opening at home against Bolivia, while Argentina is set for a difficult encounter against Chile. Venezuela, the only team in South America that has never made it to a World Cup has high expectations after their historic performance at the Copa América this year, and will be opening against an Ecuadorian side who made it to their first World Cup in 2002, and are renewing their team.
The difficulty of such a competitive qualification is that you can afford no mistakes. With all teams having a fair chance of qualifying I believe that the teams that will NOT make it, will be the ones that are least able to keep their heads cool, and are able to sue their experience to get those few points or few goals that will end up making the difference between a World Cup participant and a vacationgoer in 2014!
Posted by El Erik at 14:55 No comments: