I think José Mourinho will go over to history as the greatest coach that ever lived. What he already achieved in FC Porto, Chelsea and Inter Milan far exceed what most coaches achieve (and note, as a true global 21st century football legioneer, he has done it in now four different countries!), but what he is doing in Real Madrid is also impressive.
Real Madrid has been a circus the last years, with a rotating door of coaches, many who seem to have been pressured to use the stars in a lineup that seemed more about individual players than about the team. Understandably, fans have often been annoyed.
Everywhere he has been, Mr. Mourinho focuses on the team. No player is above the team, and he works to get the best out of every player. He has a superb eye for the form of the players and surely give them a lot of space and responsibility, something they also return.
Real Madrid's new players are looking awesome: Mesut Özil and Angel Di Maria (as well as Khedira, although with a lower profile than these two) have all been splendid. They are young, and have benefitted Cristiano Ronaldo from the passes and space that these players give him. Yesterday he scored four goals against Racing Santander, with Mesut Özil as the frequent architect.
Real Madrid has scored 12 goals in its last two home matches. Mourinho is certainly refuting his reputation as a defensive coach, but one must also mention that the team has so far only played "small" teams from La Liga (except for Espanyol). A big test will be in early November when they face Atlético Madrid, but surely the team is looking awesome.
I think Mourinho is on the way to adding more trophies to his and Real Madrid's CV.
Posted by El Erik at 16:30 2 comments:

One of the best players of all time, surely the most legendary and the one with the most goals, and icon of football, sports, and in fact, of Brazil and the century, turns 70 today.
Pelé.
The birthday is being celebrated widely in Brazil, where Pelé is emblematic for the rise of Brazilian football with his debut as a 17-year old in the 1958 World Cup (scoring two goals in the 1958 World Cup final against Sweden) and then reaching his pinnacle as captain of the 1970 Brazilian World Cup side; perhaps the most entertaining and awesome national team ever.
Who the best player in the world of football is, remains one of the most fervent discussions in world football. It is not a fair discussion, since great players have contributed different things at different times. I know my personal favourite (Diego Maradona), but I also know that perhaps nobody has meant as much for the spread of football as Pelé. Every football fan in the world should today take a moment and make a toast for this Giant.
Happy Birthday Pelé!
And cheers.
Posted by El Erik at 20:18 No comments:

Back in the 1980s there was a Spanish player from Atlético Bilbao known as "the Butcher from Bilbao" for his uncompromising and outright violent tackles that injured many players, among them Gary Lineker and Diego Maradona.
Harder refeereing has all but eliminated these kind of players, but once in a while some new "butchers" emerge, and one such is surely the Dutch Manchester City defender Nigel De Jong.
De Jong became world famous for a karate kick he gave Xabi Alonso in the world cup final. This kick became a symbol of a Dutch side that was no longer playing the beautiful style they were usually famous for.
But De Jong's sins are many: known as an uncompromising player, he managed to fracture the US player Stuart Holden's leg in a "friendly" match between the USA and Netherlands in March 2010, and this last weekend he repeated the feat of fracturing a player's leg when Newcastle's Hatem Ben Arfa was carried off the pitch in the Premier League match between their two sides.
This last tackle has fortunately been widely condemned, and the Dutch national coach, Bert van Marwijck, has decided to exclude de Jong from the Dutch national team that will play two Euro 2012 qualifiers this week.
This is surely a just punishment, but in fact, one of the worse things about de Jong has been the permissivenes of the referees; the situations with Alonso and Holden cost meager yellow cards, and for the Ben Arfa tackle, he wasn't even booked. Interestingly, the only one that has come out to defend De Jong is the Dutch captain Mark Van Bommel, another player whose tackles are not booked enough (and who should have had a couple of red cards in the World Cup).
Are the referees becoming more permissive, or are the Dutch now creating a new generation of defenders who can mask their violence? No matter what, they don't belong in football.
Posted by El Erik at 01:12 2 comments:

President Evo Morales of Bolivia plays on a football team, and a couple of days ago he came on the world media when he did something that was not so fair-play:


A lot of people would perhaps think this is a bad example to set by a president, but on the other hand, football is about passion, and if he has to lose his head, surely better he does it on the football pitch!
The referee didn't give him a red card - of course, it is the president!
Posted by El Erik at 18:38 1 comment:

I have been travelling a lot the last two weeks, but not missed out on football! I was in Lisbon this weekend, and Sunday evening, decided to go to the legendary Estadio da Luz to watch the home side Benfica against Braga. These two teams ended first and second respectively in last season's Portuguese league, and are currently the Portuguese representatives in the Champions League. Braga has done badly in the first two matches in the CL, first getting destroyed by Arsenal and this last week they lost 0-3 at home to Shakhtar Donetsks.
Benfica has a victory in the CL, but losing 0-2 to Schalke 04 still makes it a challenge for them to go through in a season that has started badly for them: before the Braga match they were only seventh in the league with 9 points for six matches, while Braga was fourth with 11, both trailing FC Porto, who started the season with six straight victories. It was therefore crucial for both teams to get a good result, and pressure was particularly on Benfica, whose play has been meagre this season.
For me, it was also special to go to the legendary stadium, and atmosphere was truly extraordinary in spite of it not being sold out (there were 44,000 spectators). I was specially impressed by the start of the match where a real eagle (the eagle is the symbol of the team) is let loose to fly in the stadium, to the cheers of the spectators, and to land by the Benfica captain.

Benfica were clearly the most motivated team, and played much better in the first half, where Braga was nevertheless disciplined in defence, including some splendid saves by the Braga goalkeeper Artur Moraes. Still, in spite of the dominance, Benfica, it seemed to me, lost too many balls, and is not entirely funcitoning as a team. In particular the elder Argentinean, Javier Saviola, worked hard as always, but lost many balls and missed some big chances (he was also taken out eventually). In the second half Benfica continued attacking, but for a while it seemed the air had gotten off the balloon, and both the fans and the team seemed more and more nervous as time advanced.
But finally, in the 77th minute, Carlos Martins scored a beautiful goal where he took the ball down very well and kicked precisely behind the goalkeeper. It could have been 2-0, as Braga, in spite of clear Benfica nerves (and some nasty nervous tackles towards the end), couldn't really answer back.
Benfica won 1-0, and because of the other results of this round, suddenly jumped to second spot (things are pretty close as there are three teams with 12 points and three with 11), but still 7 points behind the leaders of Oporto. However, this match may well mean that Benfica gets back the belief that they can again win the trophy this season!
And I was there! 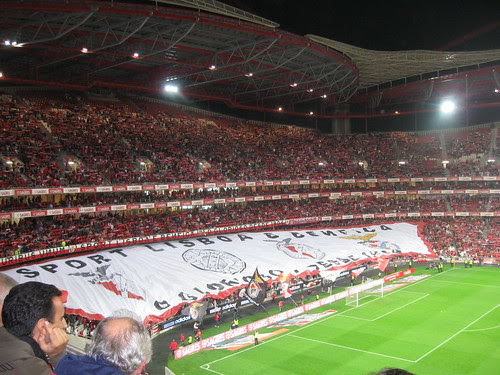