I am visiting Uruguay, a legendary football nation. Unfortunately, due to recent crowd trouble, I was unable to go watch Peñarol, who were playing against Montevideo Torque without spectators (I watched a really boring match in a bar, with Peñarol losing 0-1 to one of the lowest placed teams in the league).

But I was able to visit the site of the legendary Estadio Centenario, site of the very first World Cup final of 1930. Unfortunately I found the museum to be closed on a Sunday, a big disappointment, but I was still able to walk around the stadium, see a statue honoring the Jules Rimet Trophy (including great homages to the Maracanazo in the 1950 World Cup final, which also defines Uruguayan football), and all in all take in the history of this beautiful country and city.

I hope soon to return to Montevideo, and see more of their football. 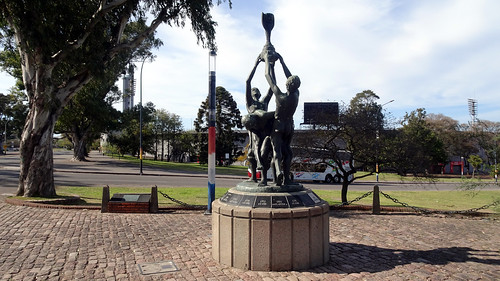