I took a walk in the beautiful picturesque neighborhood of La Boca, in Buenos Aires, today. Besides its art and atmosphere, it is yet another place where football has an important place in life: Blue and yellow colours dominate, being the colours of the local team, the great Boca Juniors, one of the greatest teams in the world, bound with traditions, and whose stadium, "La Bombonera" overlooks the neighborhood like a cathedral.
It is indeed an inspiring place, and my only regret was that I was not there to go to a match to experience the passion. Nevertheless, got some pictures: 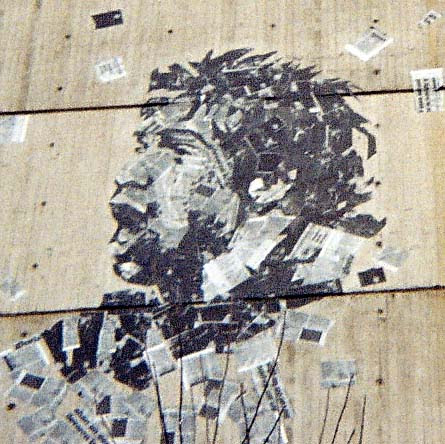 I am in Brazil. The land where football is a religion; where some of the greatest players continue to come from.
It is truly amazing to see, and one gets to understand the passion: it is beyond mere fanaticism, a mere “Hobby”. It is something that is inherent in everything – just taken for granted. I love it.
And one understands the super-power status they hold in the beautiful game: one sees people, kids, everywhere playing it. Football pitches, balls, improvised, in perfect state, professional, amateur, all ages. This is not Tanzania, where they think this is “government support” – it’s a way of life!
I recently loved watching a game in a small bar in Paraty, just to feel the passionate atmoshpere. It was between the two Rio-teams Flamengo and Vasco da Gama (the “Classic of the Millions” as it is known as). Flamengo is probably the most traditional club in Brazilian football; at least the one with the most fans, and the bar in Paraty was no exception: the place was packed with passionate Flamengo supporters who celebrated feverishly when Flamengo went ahead 1-0 on a grave defensive error by Vasco da Gama. Still, this was nothing compared to the celebration when Cristian scored an absolutely stunning long-shot goal.
Beauty was celebrated much more than a “mere” goal.
Flamengo is now my adopted Brazilian team.

It is not because I feel it was a bad tournament, quite on the contrary, but I can unfortunately think of a number of things that were a bit of bummers in this tournament – on the other hand, some of these things are also what made the tournament memorable!
So here comes the top then bummers of Euro 2008:

10) Boring teams: It has been a great tournament, with great matches and good football. And although the winning team, Spain, swore for the beautiful and attacking football, a few teams seem to be stuck with their defensive style.
9) Austrian football association: An Austrian brewery promised free beer for life to any Austrian player who scored. But when Vastic scored for Austria against Poland, the Austrian FA said no to the price…
No to free beer!!?? Please…!
8) UEFA referee rules: Inconsistency in the implementation of rules seems the most consistent thing in international football. This Euro 2008 was no exception, mostly during Ruud Van Nistelrooi’s first goal against Italy: everyone thought it should have been off-side, since the last Italian player was outside the pitch. However, rules say that he was still “in play” – shattering what everybody else thought.
Now, why should such a rule be kept secret…?
7) David Villa’s injury: David Villa became the top-scorer of the tournament with four goals in only two matches. He could have gotten many more.
6) Gomes: The German striker was a complete flop. I think nobody even got scared when he was put in in the final against Spain, and his missed goal against Austria was one of the biggest misses I have ever seen.
5) Czech Republic: The ageing Czechs were not so much a disappointment because of their mistakes (like Peter Cech’s against Turkey – he still is a great goalkeeper), but more because of the lacking capacity in closing off a match. The Czech team seems to be arrogant: we saw some of the same in the 2006 World Cup, and think a game is finished before the 90th minute.
Fortunately the Turks proved them wrong.
4) Portuguese spirit: While the Turks showed incredible fighting spirit, the Portuguese super stars were completely opposite. While rightfully hailed as favourites when the tournament started, it took only an organised and efficient German side to take away their arrogant confidence. In the last half hour of the quarterfinal the Portuguese players seemed like tired and defeated old ladies.
Portugal didn’t win because they lacked winner-mentality.
3) Greece: The defending champions of 2004 were poor to say the least.
2) France & Domeneqc: France was a huge disappointment. With the players they have their performance bordered the pathetic in spite of good moments against the Netherlands. And here, I must blame a coach which seemed too arrogant, superstitious and disrespected to lead a top-rate team of super-stars to anything.
France was hugely disappointing and that is a pity for football.
1) Swiss TV: It was completely unproper when Swiss TV used a text from the old Nazi lyrics to the German national song for the Germany-Austria game. Not only unproper I guess, but also disgusting and an insult to the great German team and people (and please, this does not mean I will support them!)
Posted by El Erik at 15:39 No comments:

The Euro 2008 was exciting, great matches, entertaining football, drama and tenacity. It was one of the best international tournaments of the last years.
In my personal opinion the five best things of the tournaments were the following:

5) Netherlands in the first round: The Dutch started the tournament like super-men, trashing the Italians and French in spectacular matches which led one to think about their spectacular teams of the 1970’s. It was a pity that they were unable to keep it up, but still, I loved seeing them, and look forward to see if they can do better in South Africa.
4) Russia: Welcome back to the Russians! Under Guus Hiddink and with some marvelous players the Russians showed that they were rightfully in the tournament. Look out for the Russians!
3) Austrian fans: In general the fans of Euro 2008 were great – although don’t mind a handful of trouble-makers, a few petty nationalisms and high prices. But I liked the Austrian fans, who gave their otherwise petty national team excellent good-humoured support which surely gave the players and extra incentive.
2) Turkish tenacity: The “crazy” Turks showed how much it matters never to give up, and for that they gave us some memorable matches in Euro 2008: Their amazing come-back against the Czechs, the incredible last-second equalizer against Croatia, and their spirited fight against the Germans were all examples of good ole’ fashioned spirit, and many teams could learn from this.
1) Spain: Spain were the best of the tournament, firstly because they finally managed to win a major tournament, and secondly because of how they did it; they played brilliantly.
Posted by El Erik at 03:33 No comments:

I have been in the Faroe Islands and Iceland for some time now (In fact, I watched the Euro 2008 final in a small café/restaurant in Borgarnes). And well, have just had underlined the fact that there are football fanatics in every corner of the world:
We had been driving for some one hundred km, when we decided to have a cup of coffee in a small non-descript road-cafeteria in a very desolate place: Littla Kaffistofan.
When we got inside the little café, we could see we were in a football-fanatic home: every inch of the walls were covered by flags, pictures, posters, shirts of teams from all over the world, as well as pictures of players and autographs. One small side-room was dedicated exclusevily to Icelandic players, of which, I am ashamed to say, I only know Eidur Gudjohnsen.
I believe we were somewhere between Hveragerdi and Reykyavik, and I would recommend anyone who likes football to check it out, since it was one of the nicest football places I have ever visited.
The following pictures are courtesy of Stig Nygaard: