I had gotten all ready to enjoy yesterday's Champions League final between Real Madrid and Liverpool with beer and choripán, but besides the beer, food and company, it was largely a disappointment.

Firstly, the delay in starting the match signaled not only gross incompetence, but total disregard of fans. While a lot of things are being said about what happened, it does seem incredible that these things can happen; this is hardly the first final they have organised...? At the same time one could see UEFA and FIFA dignitaries mingle amid celebrities in their luxurious seats, and a total disregards of the fans for whom they "manage" the game...

Secondly, the match was a disappointment. Liverpool created the match against a Real Madrid side that proved yet again that they only need one chance to win a match, and this time their 14th European Champions title. Vinicius Jr. scored the goal in a Real Madrid counterattack. Liverpool attacked and attacked, but besides a disciplined defense, they faced an incredible Thibaut Courtois, who seemed to save everything that came his way. In my opinion the Belgian goalkeeper is Real Madrid's greatest hero in getting the title.

Disappointment for all of us who were hoping for a Liverpool victory, but congratulations to Real Madrid fans. 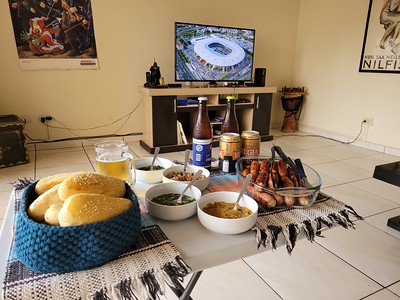 Although in the end everything finished as one might have expected (City and Liverpool victories), the end of the Premier League ended with a high level of excitement, with the surprise always looming.

To be champions City needed a win at home against Aston Villa. But with 20 minutes elft Aston Villa were ahead 0-2, and there was a clear fear in the stadium (although Liverpool were at the time not winning). But goals by Rodri and Gundogan (who came in to make two) within a magic period of five minutes, put things straight and the title in Manchester.

Liverpool knew what was happening in Manchester, and that a victory would give them the title. But Wolverhampton were a hard nut to crack, and the Wolves went ahead already in the third minute. Liverpool pressed on an towards the end of the first half Sadio Mane equalized. Knowing the result in Manchester the Reds pressed on, but the goal did not come until the 84th minute by way of Mohammed Salah. But by this time City were already up, and even though Salah scored a third in the last minute, they hardly celebrated it as they knew it was but for nothing but the goal-stats.

Liverpool ends as runner-ups, but they have an FA Cup title, and next week they will be vying for the Champions League title in a clash of Titans against Real Madrid.

This season's Champions League final was between the two best women's sides in the world: FC Barcelona had cruised to the final, and after last year's trashing of Chelsea, were probably slight favourites to continue their dominance in women's football. But facing them was Olympique Lyon, the most winning team in the women's CL, and one that had defeated FC Barcelona 4-1 in the 2019 final.

It was not to be a revenge for the Catalonians, who looked completely overwhelmed in the first half. It was only six minutes into the match when Amadine Henry scored a brilliant goal, and Ada Hegerberg and Catarina Macario scored as well to put the French ahead by the 33rd minute. And in particular the great Ada Hegerberg was playing a great match with vision and great technique.

Just before halftime Alexia Putellas scored for Barcelona, giving the many Barcelona fans in Turin hope for the second half. Surely FC Barcelona improved, but Lyon, whose defense is perhaps one of the best in the world, stood its ground, although they also made a lot of time-wasting which was surely frustrating to everyone (and largely unnecessary).

In the end Lyon won a well-deserved 8th title. And the final was a fantastic match with great atmosphere in Turin, continuing the growth of women's football!

The two teams playing the Europa League final today are not usually considered amongst Europe's best, but both sides were deservedly in the final after a strong campaign.

On the one hand Eintracht Frankfurt may not have had a strong Bundesliga season, but they have shined in the Europa league: they won their group undefeated and went on to defeat Betis (Copa del Rey champions), FC Barcelona and West Ham to make it to the final.

On the other hand Glasgow Rangers had only finished second in their group, but went on to eliminated Borussia Dortmund, Red Star Belgrade, Braga and RB Leipzig.

Frankfurt seemed to have the edge at the start of the match, but it was Rangers who went ahead in the second half on a goal by Joe Aribo after some clumsy mistakes in the German defense. But only 10 minutes later Frankfurt deservedly equalised on a goal by the Colombian striker Rafael Santos Borré. The match ended 1-1, and despite chances to both sides, the game went into a nerve-wrecking penalty contest.

It is often said the stars miss the crucial penalties, and in this case it was Rangers' star Aaron Ramsey who missed the penalty in an extremely poor shot. Rafael Santos Borré scored the final winning penalty, and ended up being the star for Eintracht Frankfurt's first international title since they won the UEFA Cup in 1980!