It was a nice Sunday in Monrovia. The second Monrovia marathon took place in the morning, and I was among the runners for the 10 Km "baby" run. The real marathon was won by a Kenyan runner. It was perhaps an announcement of things to come when on Sunday afternoon Liberia were facing Kenya in a friendly match of amputee football.
Amputee is played on teams of 7 players. And these are amazingly strong players, who play in crutches for almost an hour, managing to do things with the ball that most two-legged people cannot do. It is fantastic to see these guys whose strength is not only physical, but most of all mental and spiritual; an example of people who have come a long way with more difficulties than most of us will ever face.
These guys deserve nothing but respect.
Liberia are in fact defending African champions in amputee football, and in spite of a meager showing at the amputee football World Cup last year (won by Uzbekistan) they continue, with Ghana, to be the strongest African side. This showed in yesterday's match against Kenya, where the Liberians had great ability in moving the ball around against a defensive Kenya side. The second goal for Liberia was in fact the result of an excellent combination and a beautiful curved shot. Liberia won the friendly match 2-0, and continues to build up for next year's amputee World Cup in Mexico.
I will surely be cheering for Liberia there! 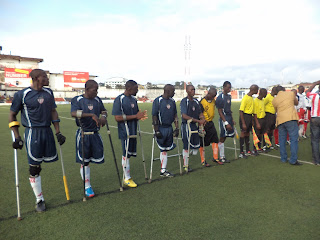 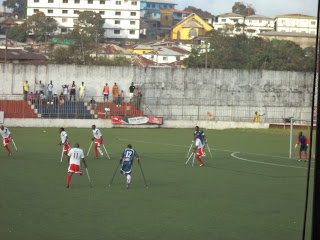 This is totally amazing and inspirational. Look forward to seeing a team from Liberia in the next parlaympics.