First in a long time

Yesterday I went out to watch football. Not at the stadium, but in a bar. This was the first time in almost 18 months that I did this, so it felt special; a small step towards the normality that we all eagerly await.

With limited TV channels offering the Euros in San Salvador, it was not easy to find a good sports bar, but I found Punto Marino Sport in the upmarket neighborhood of San Benito. Despite the name it is not really a sports bar, and I was the only person there watching football, while reggaeton music played in the background.

I nevertheless enjoyed it. First I watch England-Scotland in what was predictably a spirited fight by the Scotsmen, who largely deserved the victory, against an English side that hardly lived up to its enormous expectations. 0-0 was a fair result, and now England will play a thrilling match against the Czech Republic, who defeated Scotland 2-0, and who are looking strong. Scotland will face Croatia, and it is interesting that all teams in that group have something to play for.

I next watched the Copa America. Chile defeated Bolivia 1-0. I have been watching many Copa America matches, but I must admit that it lacks excitement and passion. The empty stadiums mean that the matches are like a party without music, and most games have been defensive and few goals. In its 0-0 tie with Colombia, Venezuela basically refused to attack, and Brazil's matches have been kind of one-sided.

The tournament should probably have been cancelled. It is nearly impossible to get excited about it (although a few beers help!). 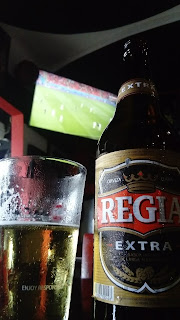