After a lovely day without football (there is a life!) in Paris, I took the famous train under the English channel to make it to London, England, to see fantastic friends.

Of course, since England was eliminated, there has been much less interest in the tournament, and there was a certain resignation, although the interest for the World Cup remains unabated in the country that, despite it all, remains the home of football.
I watched both quarterfinal matches in Brixton, a lively and diverse neighborhood in the lively and diverse city of London.
Germany-France is a match between two sides that England would like to compare themselves to, but in the current state of the game, are actually quite inferior to. The clash between the two European sides was in many ways disappointing, considering the great matches previously seen between these two countries. But there was no doubt that the best side won, repeating what they had done to France in 1982 and 1986. With Mats Hummels back, it is not only the German defense that looks stronger, but certainly also the attack, with Hummels scoring the winning goal.
France has been a good team and will surely take a lot with them from Brazil, and will certainly be a team to watch for Euro 2016.
So it came down to Colombia-Brazil to decide who would face Germany.
There are many Colombians in Brixton, and the yellow shirt was seen a lot in the street. With my Colombian background I prepared with some Colombian beers and even an aguardiente before going to a the Local Brixton Come Together. It was a good mixed crowd of Brazilians, Colombians and other nationalities, all there to enjoy the football amid songs and friendly taunts.
Brazil played the best they have played in the tournament, and went ahead 1-0 after some dreadful defending by Colombia. Even though they tried, Colombia did not get to dominate midfield in the first half, just as they had done in previous matches. The second half started a bit later in Brixton as it started raining and the TV had to be taken inside. However, we did manage to see Colombia go forward more, but Brazil take a 2-0 lead with a fantastic 2-0 free-kick goal by David Luiz.
David Luiz is going the opposite way as I did these days as he leaves Chelsea to go to Paris St. Germain. I must admit I doubted whether he was worth it, but I take it back.
Colombia did everything to get back, and almost did it. James Rodriguez made it 2-1 on a penalty kick, and were denied a 2-2 goal by Mario Yepes in a somewhat strange situation, where an off side call was only given belatedly after a strange situation.
For their last pressure Colombia could have deserved an equalizer, but in the end Brazil won the match on a strong first half and solid defending. The referee was highly criticized by the Colombians (Colombians always need conspiratorial excuses for any defeat), and he was indeed very bad, but not decisive for the match. Indeed, in the worst attack of the match, where Juan Zuniga fractured Neymar's vertebrae, was not punished as severely as it should have been.
Neymar is out of the World Cup and that is a loss to all fans of great football out there.
A pity for the Colombians, but the semifinal between Brazil and Germany is the semifinal of legends, between the two greatest sides in World Cup history facing one another in what should be an epic match.  That said, with the few goals we have seen in the knock-out stages, it is perhaps more likely to end 0-0 and go to penalties.
I hope not.
In the end everyone had a great time in Brixton. So did I, and was happy to see a place where people of different nationalities can get together and enjoy a game where 22 men chase a leather ball in great spirit and friendship.
I am afraid this is rather the exception than the rule in most of the world. 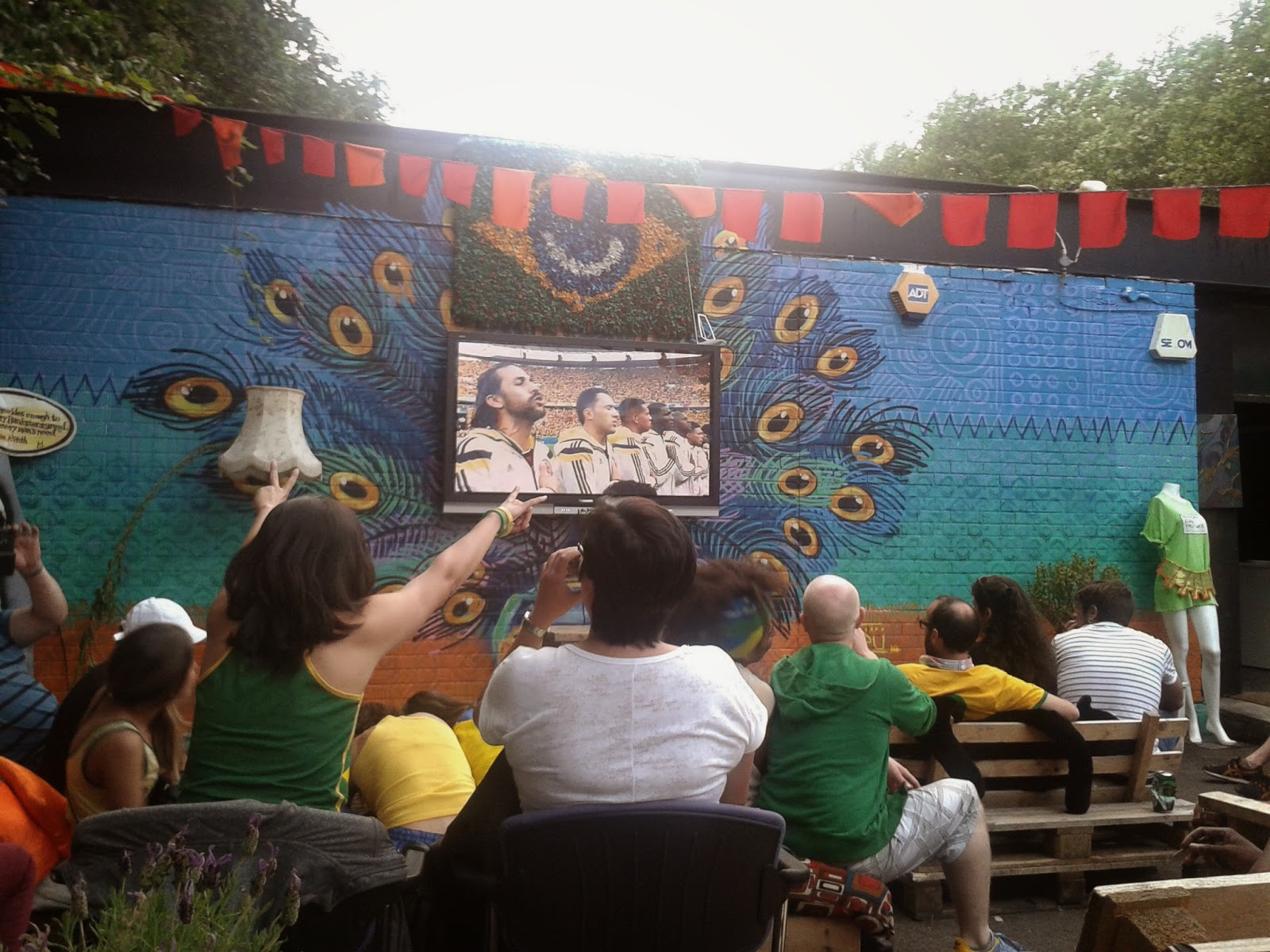