I lived in Ghana for many years, and it is with happy nostalgia that I have seen that the Ghana U20 team has won the 2009 U20 World Cup in Egypt, by defeating Brazil in the final, 4-3 after penalty kicks! This is the first time ever an African team wins this tournament, and breaks eight years of South American dominance in the tournament, although Ghana was also in the final in 1993, losing to Brazil, and in 2001 (in fact defeating Brazil in the quarterfinals), losing 3-0 to an outstanding Argetninean side in the final.
But Ghana are now World Champions!!!!!
In most of Europe the Cup has had very limited interest, which just shows that Europe has little interest in the stars of the future, beyond the ones they can pay millions to get outside Europe.
And this is a pity, as the U20 World Cup in Egypt has been excellent, and I do not believe the significance of Ghana's victory should be underestimated: after an outstanding 2006 World Cup (when I happily lived in Ghana), Ghana has now qualified for the 2010 World Cup as well. With players in the best European league, a strong domestic league, outstanding youth-talent, and what is arguably the best and most professional football organisation in all of Africa, Ghana has really become the only serious contender for being Africa's first World Champion.
It will be a long road to travel, but Ghana has taken a first step, and I am celebrating with all wonderful people of Ghana! 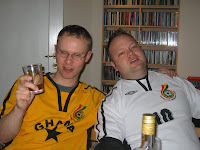 I really like your picture of two typical Ghanian supporters :-)