Today I happened to be in Mexico City, and as America were playing at home on the Estadio Azteca I decided to go to watch the match.
There is something special about being at the mighty and impressive stadium where Pele and Maradona both lifted the World Cup trophy. Where Maradona and Carlos Alberto scored two the greatest World Cup goals ever!
So more than anything it was fantastic to be in this altar of the game.
The match between America and Santos Laguna was important as it was the last match of the league stage of the Mexican Championship, and with both teams qualified, America nevertheless wanted a good result to end with a lower standing opponent. Santos were above America before the match, so a tie was ok for them, and you could see it by the fact that they largely decided to park the bus (altthough Djaniny did create some dangerous chances) in particular in the second half, when America tried to put more pressure on the visitors. But two substitutes made the difference: The young Paraguayan Cecilio Dominguez (who was nevertheless a surprising non-starter) came on and got a penalty that the ex-PSG and Milan player Jeremy Menez (who came in after four weeks out due to injury) scored on to give them the victory.
America ends on second position (behind Toluca) and will be playing the seventh qualified team.

The America fans were great, but watching the Mexican league I still would love to see the splendid Chivas and Rayados fans. I have still not fallen for a Mexican team, but may still with time! 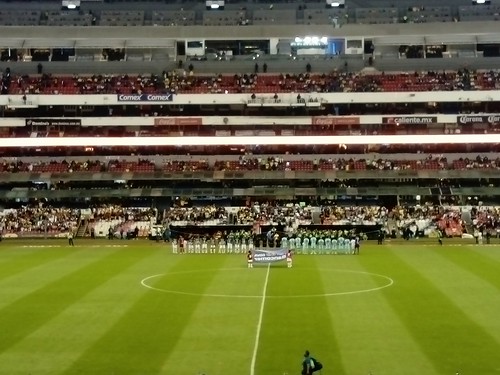 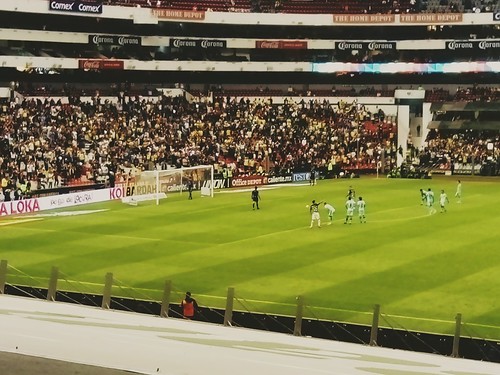 Santos Laguna ended up as Mexican champions of the Clausura. In the semifinal they destroyed America and then went on to defeat Toluca in the final. I had not seen this coming when I went into see this match. if anyone had told me I was watching the future Mexican champions, I would have thought they were talking about America.
So congratulations to Los Guerreros!